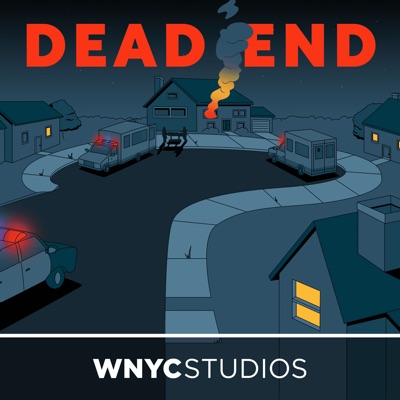 New Jersey politics is not for the faint of heart. But the brutal killing of John and Joyce Sheridan, a prominent couple with personal ties to three governors, shocks even the most cynical operatives. The mystery surrounding the crime sends their son on a quest for truth.  Dead End is a story of crime and corruption at the highest levels of society in the Garden State.

New Jersey politics is not for the faint of heart. But the brutal killing of John and Joyce Sheridan, a prominent couple with personal ties to three governors, shocks even the most cynical operatives. The mystery surrounding the crime sends their son on a quest for truth. Dead End is a story of crime and corruption at the highest levels of society in the Garden State.

On a quiet cul-de-sac, a husband and wife of 47 years are stabbed to death in the stillness of dawn. Honest and unassuming, John Sheridan, famous for never raising his voice, played against type in the rough-and-tumble world of New Jersey politics. Could the Republican lobbyist have killed his wife Joyce—a veteran public school teacher and no-nonsense mother of four sons—then set their bedroom on fire before knifing himself? That’s the version of events authorities say happened in the early morning hours of September 28, 2014. But, in more ways than one, the theory doesn’t add up. Key voices interviewed in episode:• Christine Todd Whitman, former Governor• Chris Stevens, Joyce Sheridan’s best friend• Bob Stevens, husband of Chris’ Stevens• Mark Sheridan, eldest of the Sheridans’ four sons, lawyer for Governor Chris Christie's campaign and for the state Republican party for more than a decade• Peter Sheridan, John’s younger brother and federal judge in Trenton since 2005• Mary Kay Roberts, hired by John Sheridan at Riker Danzig, a New Jersey law firm. Worked with him closely for a decade in the Trenton office• John Farmer, a former state Attorney General and friend of John Sheridan who runs a political research center at Rutgers University A previous version of this episode referred to Mark Sheridan as the “personal lawyer for Chris Christie.”  In fact, he was the personal lawyer for the Chris Christie campaign.  We have updated the episode to correct this.

EPISODE 2: Not Your “Typical” Murder Suicide

The Sheridans’ eldest son Mark is consumed with getting to the bottom of what happened to his parents. As the lawyer for Governor Chris Christie’s election campaign, Mark is in a unique position to uncover answers. Instead, he’s met with roadblock after roadblock. The questions really pile up when he learns that detectives haven’t even interviewed several key witnesses or completed a thorough investigation of the crime scene. Not only that, a key piece of evidence is missing. New voices interviewed in episode: • Barry Jansen, retired forensic technician for the Somerset County Prosecutor's Office • Tom Draper, Sheridans’ neighbor • Michael Baden, medical examiner hired by the Sheridan brothers   A previous version of this episode referred to Mark Sheridan as the “personal lawyer for Chris Christie.”  In fact, he was the personal lawyer for the Chris Christie campaign.  We have updated the episode to correct this.

The knife used to kill John Sheridan is just the first of many clues casting doubt on law enforcement’s conclusion of murder suicide. A newspaper crime reporter, a veteran homicide detective out of Philly, and a whistleblower point to significant pieces of evidence that have been disregarded—even thrown into a dumpster. Although Mark has the state attorney general and the county prosecutor in his cell phone, he still gets stonewalled. The authorities assure the political insider that his parents had a dark secret, which will eventually come to light. Mark isn’t convinced. Instead, as he goes through his parent’s papers, he stumbles into a different fight. New voices interviewed in episode: • Barbara Boyer, reporter from the Philadelphia Inquirer • Eddie Rocks, veteran homicide detective, retired from the Philadelphia police. • Lawrence Kobilinski, professor emeritus, department of sciences at John Jay College of Criminal Justice in New York • Professor Keith Taylor, professor, Department of Law, Police Science and Criminal Justice Administration, John Jay College of Criminal Justice (and a former NYPD detective)   A previous version of this episode referred to Mark Sheridan as the “personal lawyer for Chris Christie.”  In fact, he was the personal lawyer for the Chris Christie campaign.  We have updated the episode to correct this.

EPISODE 4: The Dirt on the Garden State

After it becomes clear the Somerset county prosecutor’s office couldn’t have done a worse job (unless their goal was to destroy the crime scene), some 200 prominent citizens send a letter to the state attorney general asking for his office to intervene in the investigation. Despite the letter signed by the biggest names in New Jersey legal circles—including two former attorneys general and three former governors—the attorney general never gets involved. The quest to find out why takes us through a brief history of problems in New Jersey's criminal justice system. New voice interviewed in episode: • Ed Stier, lawyer, joined the attorney general’s Office in New Jersey in the 1960s to investigate and prosecute organized crime

John Sheridan’s decision to go work at Cooper University Hospital came at a curious time. It was just months after news about the Palmyra tapes came out. The tapes caught George Norcross bullying and offering a favor to a small town official; they are a rare instance where evidence emerged of the rough and tumble side to the south Jersey political machine. An email shows Norcross' control over the state legislature and city council members in Camden explain what it means to be a "yes yes" person. • Kelly Francis, union organizer and Camden activist • Kevin Riordan, Philadelphia Inquirer reporter who has covered south Jersey off and on for the past 45 years • Micah Rasmussen, director of Rebovich Institute for New Jersey Politics at Rider University • Tom Knoche, lecturer at Rutgers University in Camden • Matt Katz, reporter at WNYC • Shaneka Boucher, Camden City Councilwoman • Marilyn Torres, Camden City Councilwoman • Jeffrey Brenner, doctor who worked and lived in Camden during its worst years

EPISODE 6: On the (Camden) Waterfront

A couple months after his parents’ deaths, Mark Sheridan comes across a paper trail: extensive email exchanges, dated memos, and handwritten notes detailing a real estate deal on the Camden waterfront. His father, John Sheridan, wrote himself a note on an envelope: “I have a duty of loyalty and good faith and I need to act in a way consistent with that responsibility." How did John act and what impact did it have? New voice interviewed in episode: • Jeff Pillets, an investigative reporter who spent a year at the Bergen Record looking at George Norcross and his insurance business

In February 2015, the Somerset prosecutor announced that John Sheridan had murdered his wife in cold blood and then killed himself. In 2017, the manner of death was updated to “undetermined.” From the local detectives to the state’s Attorney General’s office, a lot of people walked away from these murders. If a family as powerful and well-connected as the Sheridans gets such bad treatment, what does this say about the justice system in New Jersey? New voices interviewed in episode: • Ben Barlyn, lawyer who filed a whistleblower lawsuit against the Chris Christie administration.  • Peter Sheridan, younger brother of John, and a federal judge in New Jersey.
See More
Comments (6)

Too many ads, too much repetitive information. This did not need to be more than one or two episodes.

My issue has been solved! https://www.myallsaversconnect.net/

This initial investigator of the crime scene is lying. It's so obvious. https://thegeekcart.com/best-printer-for-sublimation

Just listening to what Democrats vote for.

Jansen saying evidence lead to a murder suicide conclusion but no evidence what so ever that says it was a double homicide. Either Jansen and colleagues are covering up for someone or they are the dumbest detectives in the world.

This initial investigator of the crime scene is lying. It's so obvious.