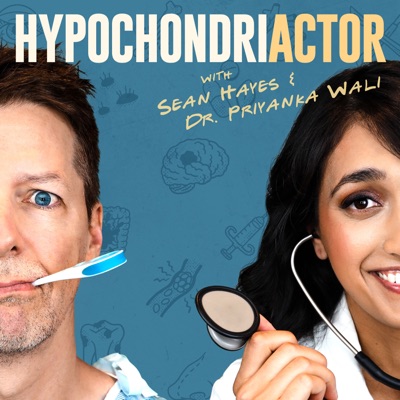 Dr. Priyanka Wali is a licensed and practicing physician who specializes in Internal Medicine and is also a stand up comedian. Sean Hayes is NOT a Doctor and he’s never played one on tv, but he sure is interested in medical stories, medical advice and whatever might be ailing him at any given hour. Each episode, Sean and Dr. Wali bring on a guest with an incredible medical story and discuss the outcome. They’ll also play games, quiz each other on medical history, and learn a thing or two... all in an effort to marry comedy and medicine. We think it’s safe to say that Sean’s not America’s first hypochondriac, but he IS America’s first HypochondriACTOR!

For more information about HypochondriActor and other Hazy Mills Podcasts go to HazyMills.com
92 Episodes
Reverse 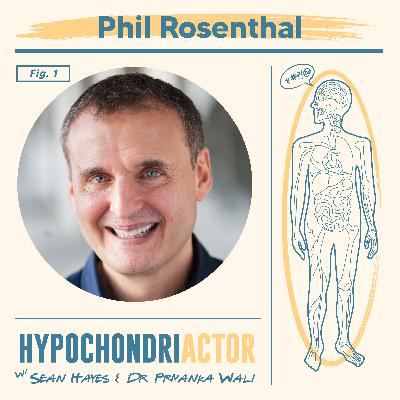 You may say they are dreamers! Priyanka discusses how her fantasy of safely eating a walnut came true in her dreams. Sean wonders why his heart races while he sleeps. Everybody loves Phil Rosenthal! He joins the podcast this week to discuss his Netflix show, Somebody Feed Phil, and the incredible work of I Am ALS. 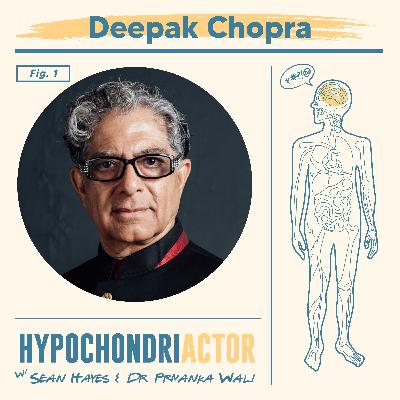 Sean and Priyanka discuss the books currently occupying their minds. The incredibly smart Deepak Chopra is on the show! He discusses his new book, his many years as a doctor, and his experiences with plant based medicines. 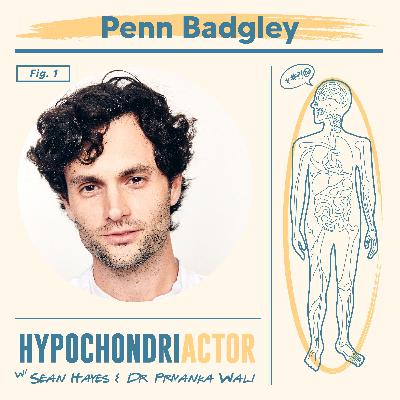 Priyanka reveals her love of the dentist and Sean is NOT here for it. Girl, on this episode, we're gossiping with the incredible Penn Badgley! He discusses his podcast, the new season of YOU and the health complications he had as a baby. 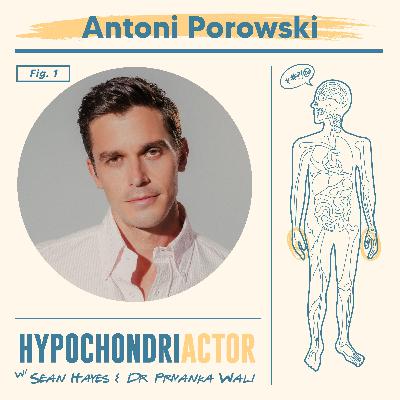 Welcome back to a brand new year of HypochondriActor! On this episode, Sean and Priyanka discuss their thoughts on New Year's resolutions. Queer Eye's Antoni Porowski is on the podcast! He talks about his new Netflix show and the idiopathic clubbing that happens in his fingers. 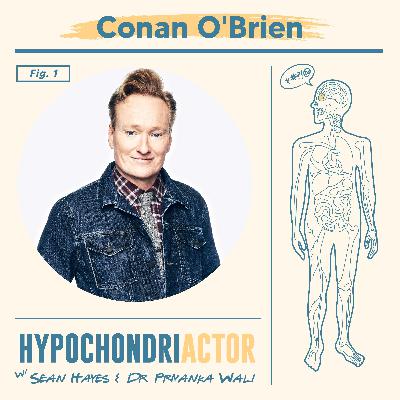 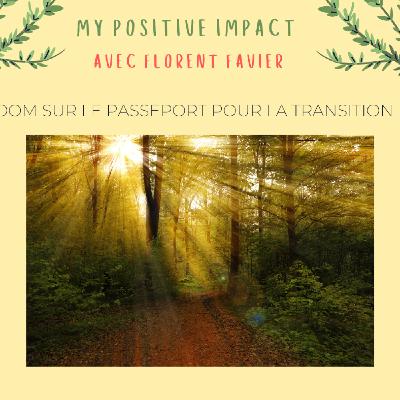 In the last episode of 2022, Sean and Priyanka are joined by a very special guest. ... Sean's husband Scotty! Sean, Priyanka, and Scotty discuss their holiday traditions, their plans for the season and Scotty's scary hypoglycemic episode. We will be back in the New Year with new episodes! 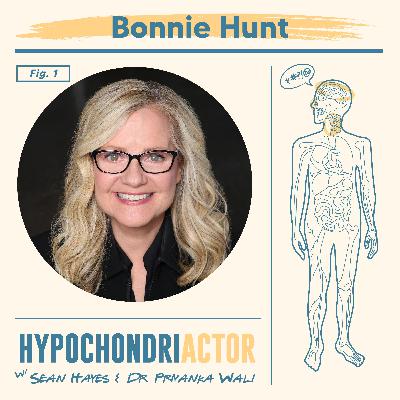 Sean learns something new about Priyanka ... She's fluent in Spanish! A caller shares how her pregnancy helped her headaches. The hilarious Bonnie Hunt joins the podcast to discuss her allergy to fragrances and her legendary resume. 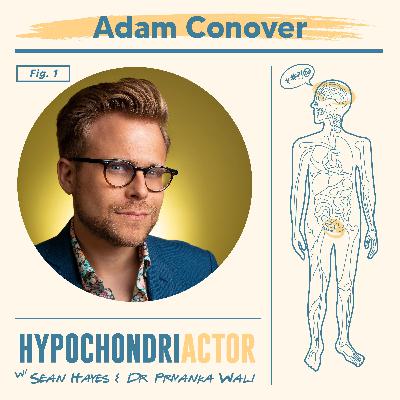 Can you believe tomorrow is December? Sean and Priyanka share their thoughts on the holiday season and how much they dislike Black Friday. Adam Ruins Everything ... except this podcast! Adam Conover is on to discuss his Netflix show, his stand-up tour about his ADD, and how he used to wet the bed as a child. 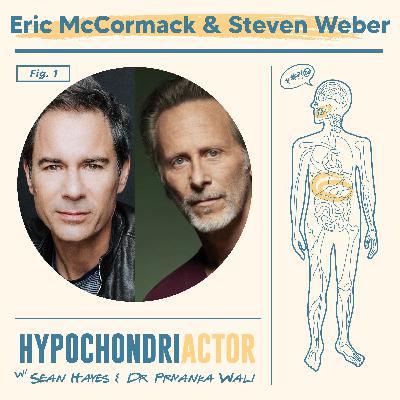 It's Thanksgiving! Eric McCormack (Will & Grace) and Steven Weber (Wings, Chicago Med) join Sean and Priyanka for a special holiday episode. They share all their favorite (and least favorite) Thanksgiving memories, give updates on their medical anxieties, and discuss Eric and Steven's new dinner party podcast! 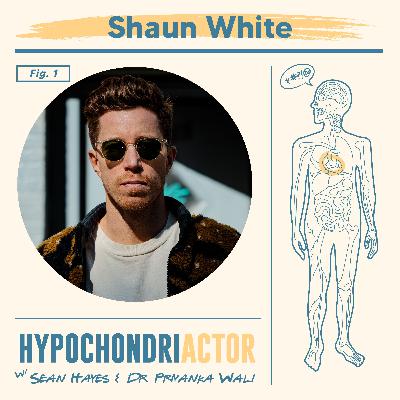 Sean asks Priyanka about the worst advice she's ever received (and how she ended up in the middle of a gang fight). Olympian Shaun White is on the podcast to talk about his new lifestyle brand Whitespace and his congenital heart defects. 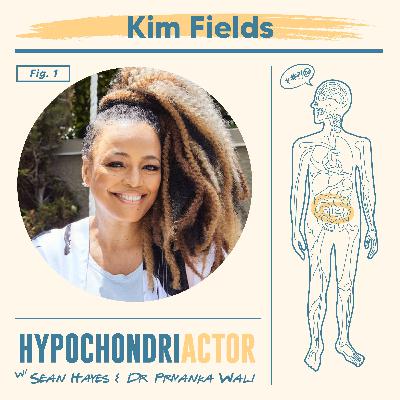 Sean and Priyanka discuss journaling their days away and the benefits it has to their mental health. The wonderful Kim Fields joins the show to discuss her surprise pregnancy and her Netflix show The Upshaws. 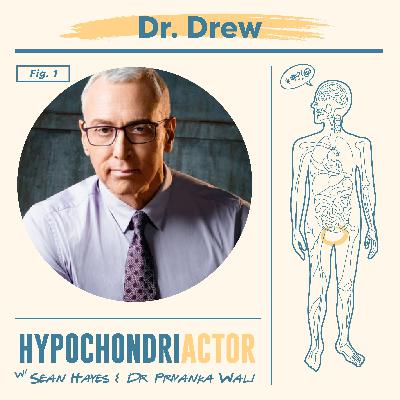 It's an all doctor episode! The FDA Commissioner joins Sean and Priyanka to discuss the importance of getting vaccinated this flu season. Dr. Drew is on the podcast! From Loveline to Ask Dr. Drew, he shares all about his career and his prostate cancer diagnosis. 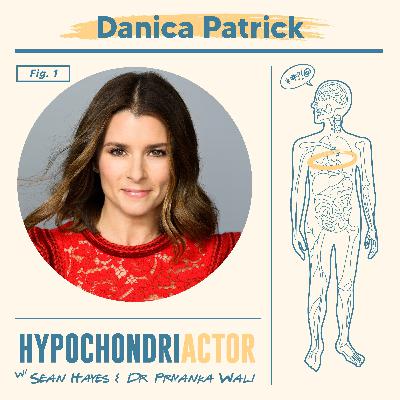 Boo! On this spooky episode of HypochondriActor, Sean and Priyanka share their favorite costumes from Halloween past. NASCAR legend Danica Patrick joins the show to discuss her experience with breast implant illness.To leave a message for Sean and Dr. Wali please call 323-529-6031.For more information about HypochondriActor other Hazy Mills shows go to www.HazyMills.comTo listen to full episodes of The Randy Rainbow Podcast go to: apple.co/randyrainbow 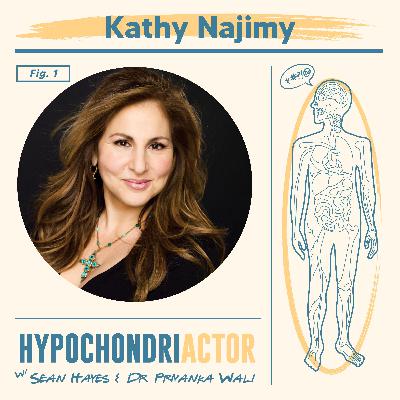 Sean discusses with Priyanka the return of his ocular migraines. It’s spooky season and our favorite witch Kathy Najimy is on the podcast. She talks about Hocus Pocus 2 and living with diabetes.To leave a message for Sean and Dr. Wali please call 323-529-6031.For more information about HypochondriActor other Hazy Mills shows go to www.HazyMills.comTo listen to full episodes of The Randy Rainbow Podcast go to: apple.co/randyrainbow 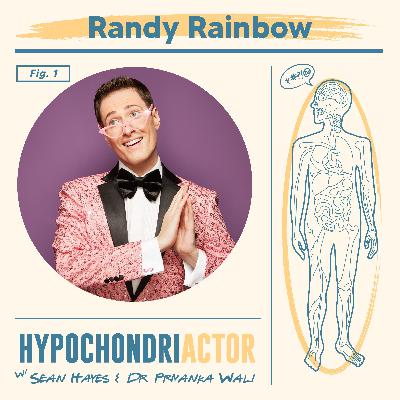 Sean and Priyanka discuss the smells that trigger instant nostalgia. Can you guess Sean's cologne of choice? The glorious Randy Rainbow comes out and onto the show! He talks about starting his own new podcast and feeling claustrophobic on airplanes.To leave a message for Sean and Dr. Wali please call 323-529-6031.To listen to full episodes of The Randy Rainbow Podcast go to: apple.co/randyrainbow 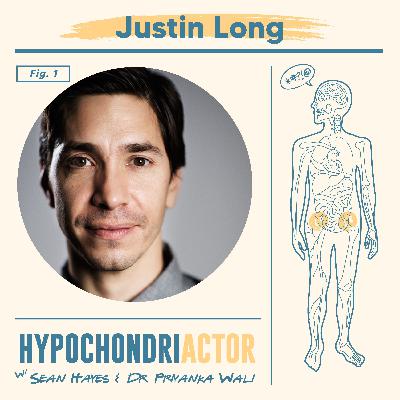 Sean shares a clip of Carol Burnett on The Randy Rainbow Podcast. Priyanka and Sean gush about their love of music. Justin Long tells the tale of his mysterious butt bite.To leave a message for Sean and Dr. Wali please call 323-529-6031.For more information about HypochondriActor other Hazy Mills shows go to www.HazyMills.comTo listen to full episodes of The Randy Rainbow Podcast go to: apple.co/randyrainbow 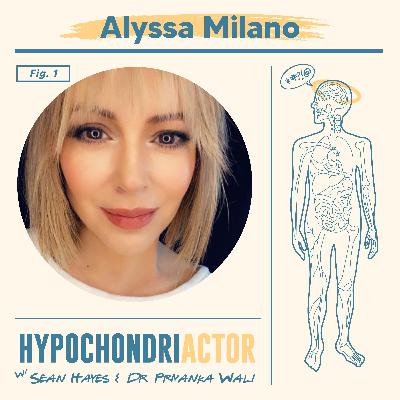 Priyanka lets Sean in on her new daily habit. Alyssa Milano is on to talk about her complex PTS and the methods she uses to calm her mind.To listen to full episodes of The Randy Rainbow Podcast go to: apple.co/randyrainbow 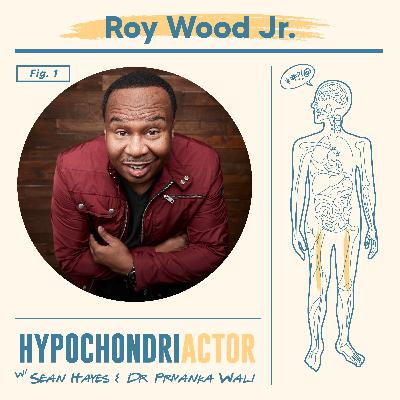 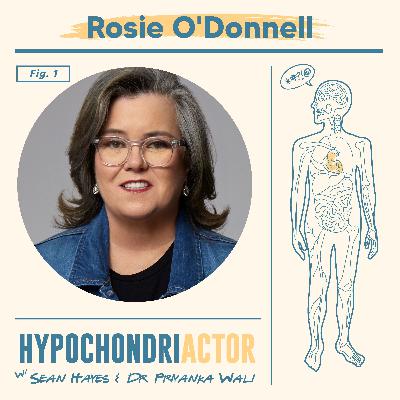 Sean and Priyanka share the best gifts they have ever received. Rosie O'Donnell is on the podcast to talk about "A League of Their Own" and the time she had a major heart attack. 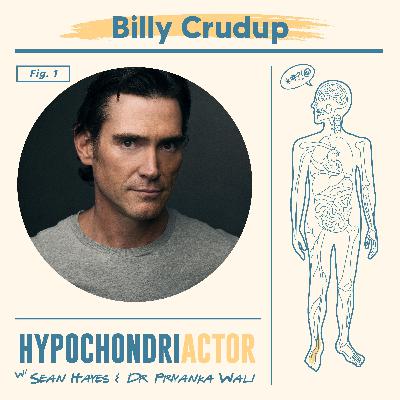 Priyanka tests Sean's memory of the roles he's played and the scenes he'll never forget. Billy Crudup discusses his Emmy-nominated performance on The Morning Show and his experience having a "pee fracture."
See More
Comments (13)

Sean, I remember you talking about having ocular migraines, because I have them, too. for me, they presented as what appeared to be very large amoebas in my periphery, encroaching upon my vision. They would invade my vision until it got down to a small circle. very disturbing. I rarely got a headache, and almost think that the headache I would get would be from stress, rather than a typical migraine. It was never that painful. I cut out nitrates and they went away. I used to eat processed lunch meat. Once I cut that out, I don't think I have had the migraine since. I hope you find the source of yours. They can be very distressing. Love your show and love the two of you.

I know this is crazy Sean and Priyanka but I am listening to this episode a little late on June 21st and I just got done listening to the song Poison from Bell biv DeVoe while I was ordering my coffee and then you continued with your story here talking about the song Poison and the little rift and not getting it out of your head and I just think that is very cool and a little karmically funny. 😆 Sean a bit of fan forever and Priyanka you are amazing as well and I look forward to seeing some of your stand up!! much love from Minnesota. ❤️

I have overlooked the references to politics and bashing former presidents but this episodes with yet another privileged, liberal Hollywood twit was too much. This could have been a great podcast for those who appreciate medical issues. For people who swear they are non judgemental you're just another couple of bullies who push your own political agenda.

She's great until she brings up politics. Please no more politics or I'm out.

Sean, can you elaborate on what you said you take for sleeping please? I am an insomniac also and have been wondering about cbd/thc products but I don't want to just go out and blow a bunch of money. I just need a starting point and figure out who to talk to or what company to talk to first. Love the podcast and Sean, I am a lifelong fan of yours and Priyanka it is so good to "meet" you through this podcast. I think you are fantastic!

Hi folks! I just discovered your podcast last week and just heard this one with Mr. Kimmel. Block Therapy is a wonderful practice that, with discipline of only a few minutes a day, dramatic changes have happened for thousands of people worldwide, for numerous physical and emotional complications. Those with Neuropathy (and also for Anxiety, Sean) have found relief. It's simply a practice of lying on specific blocks and then doing small and slow movements to "melt" fascia adhesions. It has helped my Fibromyalgia and Chronic Myofascial Pain. It has reversed Scoliosis, lessened Sciatica, healed sprains quickly, eliminated cellulite, lessened wrinkles, etc, etc. I know it sounds too good to be true but it is for real! I don't recall what the problem someone had but with the practice, the need for surgery has been eliminated! The founder is based in Winnipeg, you know, the centre of the world hahahaha, I had been forced to do so many things following 2 car accidents, including the incredibly painful Trigger Point Needling, Physio, Weights and Cardio, Accupuncture, and on and on, but only felt worse at times, if not flared up. After 30 years from the first accident I had finally found Block Therapy, the ONLY thing that's helped. I noticed an improvement the very first time I tried it. I would never pay for a membership for anything, but you bet I pay for this one! In a private FB group, with membership, people are constantly helping each other and the founder, Deanna, answers all as well. Every month there's a free series available without membership but you need an account. It's 3 half hour classes over 3 days, and there's also a new series of 9 classes to try when you don't have a block, for $9. It wouldn't be as effective as with a block but it gives you the idea what this is all about, apparently. I recommend this for pretty much anyone, for pretty much anything. Here is the website: https://blocktherapy.com/. Thanks all! Love ya.

The episode hasn't even started yet and you two are just awesome!! I can't get enough of this show.👏

I am spreading the word about this podcast. it is wonderful and I absolutely love it. I usually listen while I'm driving and I forget to hit the like button but I will try to go back and make sure to do that. thank you so much!!❤️

This podcast really made me think today. It's another reason for me to start eating more healthy. Time for change. Thank you all! Sean, you are the funniest!

I have really enjoyed your podcast. My mother is dying of Alzheimer's and I wasn't aware of the diabetic connection, so thank you for giving me another tool to fight against the same fate. In that respect, I was wondering whether Stevia sweetened drinks should also be avoided?

Didn't he play an intern once on Scrubs? :)