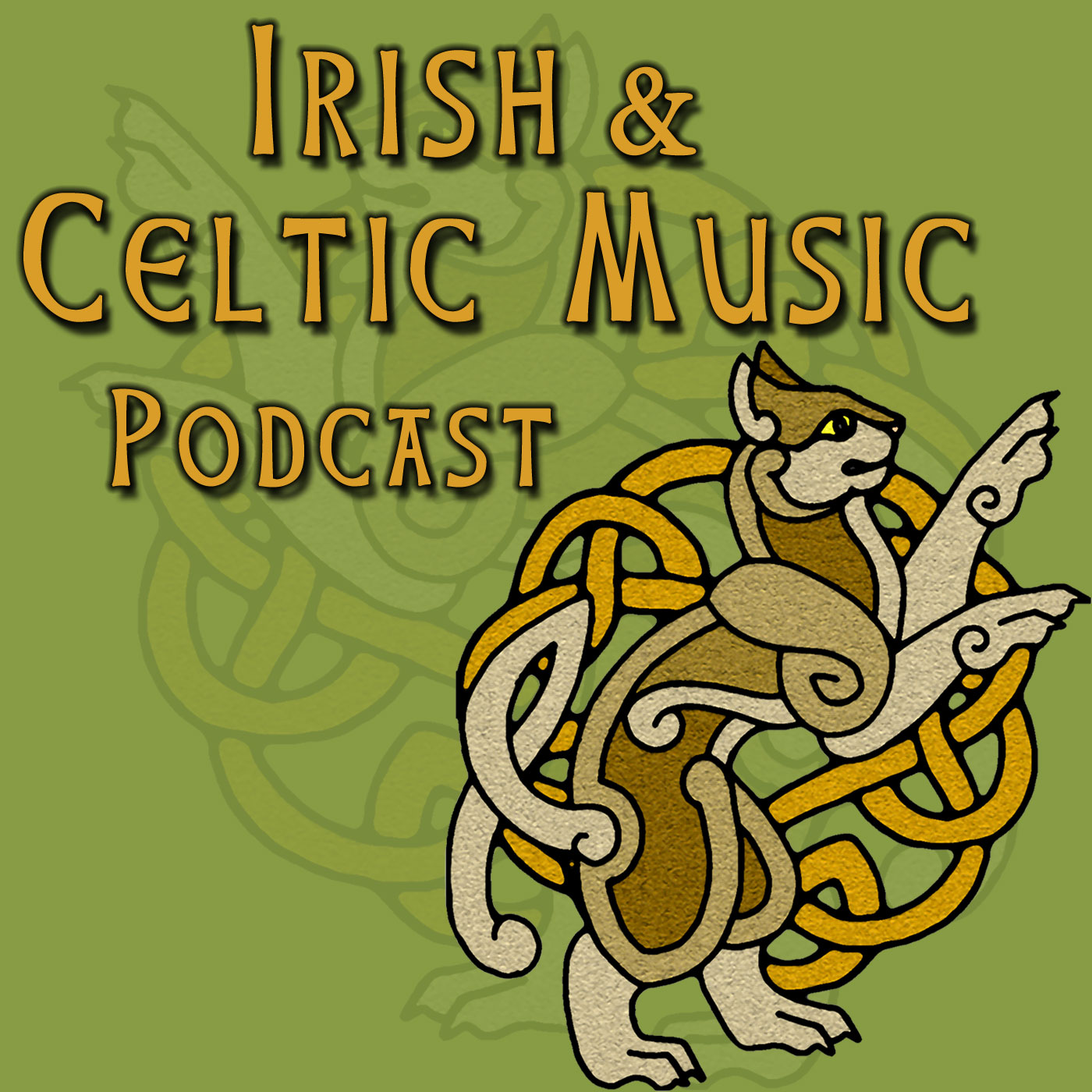 If you love Celtic music, then welcome to Irish & Celtic Music Podcast. Each week, you'll receive an hour-long award-winning Celtic radio show featuring some of the best independent Irish & Celtic music, and all 100% FREE! It is one of the top music podcasts on iTunes and receives over 10,000 downloads of each show each and every week. You can subscribe to have it automatically download through your favorite podcast player.

Did I mention, it was FREE?
601 Episodes
Reverse

Dance a dinosaur jig with the Irish & Celtic Music Podcast. Raúl Sanz, The Bow Tides, The Haar, Anne Roos & David Blonski, Kinnfolk, Niamh Dunne, We Banjo 3, SeeD, The Fretless & Taylor Ashton, Billy Treacy & the Scope, The Grenaways, Drumspyder, Wakefire, Altan VOTE IN THE CELTIC TOP 20 This is our way of finding the best songs and artists each year. You can vote for as many songs and tunes that inspire you in each episode. Your vote helps me create next year's Best Celtic music of 2022 episode.  Vote Now! GET CELTIC MUSIC NEWS IN YOUR INBOX The Celtic Music Magazine is a quick and easy way to plug yourself into more great Celtic culture. Subscribe and get 34 Celtic MP3s for Free. THIS WEEK IN CELTIC MUSIC 0:02 - INTRO: Annie Lorkowski, Celtic Legend Patron of the Podcast 0:11 - Raúl Sanz "Jiga del dinosaurio / Olivia / Jorge" from La espiral del lobo 4:14 - WELCOME 5:52 - The Bow Tides "Trip to Gaelicia" from Sailing On 10:04 - The Haar "Willie Taylor" from The Haar 14:19 - Anne Roos & David Blonski "In Midnight's Silence" from A Winter's Dance 18:23 - Kinnfolk "The Barnyards of Delgaty" from The Knotted Circle 20:46 - FEEDBACK 22:23 - Niamh Dunne "Hallowed Ground" from Tides 27:25 - We Banjo 3 "Open The Road" from Open The Road 34:23 - SeeD "The Green Man" from FAE 38:49 - The Fretless & Taylor Ashton "Alaska" from Open House 42:30 - THANKS 43:40 - Billy Treacy & the Scope "The End" from Life 47:41 - The Grenaways "Old Mast" from Skath Vyghan 51:22 - Drumspyder "The Birds" from Sunne and Mona 55:33 - Wakefire "Smuggler's Song" from Meaning of Life 58:54 - CLOSING 1:00:13 - Altan "An Cailan Gaelach" from Island Angel The Irish & Celtic Music Podcast was produced by Marc Gunn, The Celtfather. The show was edited by Mitchell Petersen with Graphics by Miranda Nelson Designs. Visit our website to subscribe to the podcast and our mailing list. You’ll find links to all of the artists played in this episode. You’ll get access to our Best of this Year Playlist. And you will better connect with your Celtic heritage. The show is supported by our Patrons of the Podcast on Patreon. Subscribe to get bonus podcasts and vote in the Celtic Top 20. The Irish & Celtic Music Podcast is here to build our diverse Celtic community and help the incredible artists who so generously share their music with you. Finally, please tell one friend about this podcast. Word of mouth is the absolute best way to support any creative endeavor. Promote Celtic culture through music at http://celticmusicpodcast.com/. WELCOME CELTOPHILE TO CELTIC MUSIC * Helping you celebrate Celtic culture through music. I am Marc Gunn. I’m an Atlanta  -  based musician and podcaster. You can find a link to all of the artists in the shownotes, along with show times and chapters for each song when you visit our website at celticmusicpodcast.com. If you hear music you love, please email artists to let them know you heard them on the Irish and Celtic Music Podcast. Do you have the Irish & Celtic Music Podcast app? It’s 100% free. You can listen to hundreds of episodes of the podcast. Download it now. If you’re in need of a great podcast, make sure you check Libsyn. Use the coupon code CELTIC to save. WHAT’S NEW IN IRISH & CELTIC MUSIC: BEST OF 2022 Two weeks after the episode is launched, I compile the latest Celtic Top 20 votes to update a playlist on Spotify, Amazon Music, and YouTube. These are the results of your voting. You can help these artists out by following the playlists and adding tracks you love to your playlists. Subscribe to our newsletter to find out who was added this week. Listen on Spotify, Amazon Music, and YouTube. THANK YOU PATRONS OF THE PODCAST! Because of Your kind and generous support, this show comes out at least four times a month. Your generosity funds the creation, promotion and production of the show. It allows us to attract new listeners and to help our community grow. As a patron, you hear episodes before regular listeners, vote in the Celtic Top 20, and a private feed to listen to the show.  All that for as little as $1 per episode. You can also get music - only episodes, and free MP3s as a Song Henger. A special thanks to our newest Patrons of the Podcast: HERE IS YOUR THREE STEP PLAN TO SUPPORT THE PODCAST Go to our Patreon page. Decide how much you want to pledge every week, $1, $5, $10. Make sure to cap how much you want to spend per month. Keep listening to the Irish & Celtic Music Podcast to celebrate Celtic culture through music. You can become a generous Patron of the Podcast on Patreon at SongHenge.com. TRAVEL WITH CELTIC INVASION VACATIONS Every year, I take a small group of Celtic music fans on the relaxing adventure of a lifetime. We don't see everything. Instead, we stay in one area. We get to know the region through its culture, history, and legends. You can join us with an auditory and visual adventure through podcasts and videos. In 2023, we’re going on a Celtic Invasion of County Mayo in Ireland. We’re gonna explore the area and get to know Grace O’Malley, the Pirate Queen. Learn more about the invasion at http://celticinvasion.com/ #celticmusic #irishmusic #celticmusicpodcast I WANT YOUR FEEDBACK What are you doing today while listening to the podcast? You can send a written comment along with a picture of what you're doing while listening. Email a voicemail message to celticpodcast@gmail.com

Queen Among The Heather #577

Hiii, I'm from Kurdistan , I love your podcast , this is by far the best podcast I've subscribed , and this episode made my day

Hi Mark, I love listening to your podcasts while I bake my souls cakes for Samhain, and prepare my Yule pudding! The Yule pudding is super tasty on toast and biscuits, wish I could share some with you n our family💜 Many blessing from a Pennsylvanian Witch

Blah blah blah, another podcast with the obligatory "Patreon this, Patreon that" garbo. I like the music, so I just skip over those parts.

Great show as always! Those last couple were a blast to listen to! 👌

What a wonderful podcast to unwind with on a Sunday night. 👍

Another episode listened to, another one enjoyed. Thanks 👍

I'm so excited that i found your channel with your amazing, wonderful and cultural music, Love Irish & celtic songs, thanks a lot ❤️

Good Irish music. A must listen to if you like the music.

Hey Man ' Thanks for this great episode And Marry Christmas ❤️👍

working usually...I play the podcast in my store:)

Fantastic podcast! I have very very few podcasts downloaded on my phone but this is one. Many episodes bring a warm memory glow in tough times, others open my ears to unheard gems, and others wash splendidly over my celtic heritage-lined body! Thank you! Regards Dr. Ciarán O'Keeffe