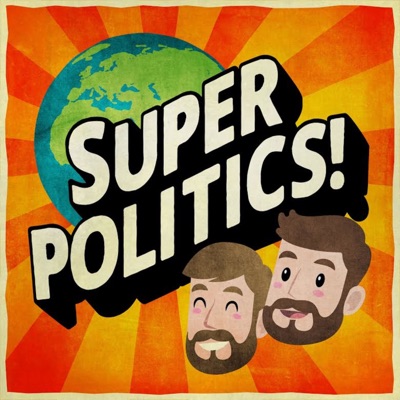 A lawyer and a hip hop producer break down today’s major political questions, discuss what people disagree about and why, and give you all the correct answers. It’s the leftist politics comedy podcast of your dreams. Full episodes released bi-weekly.

Support this podcast and access bonus episodes on patreon.com/superpoliticsshow

Nothing in this podcast should be taken as legal advice or solicitation of an attorney-client relationship. “Steve Daly” is a pseudonym and he is not your lawyer. For real-life legal issues, please consult with independent counsel.
12 Episodes
Reverse 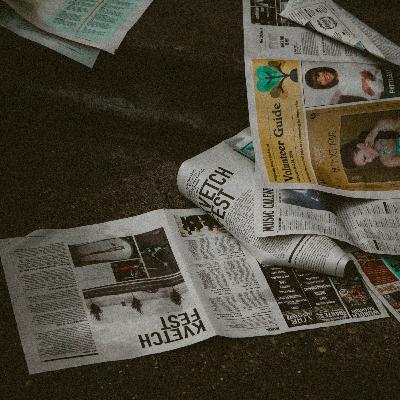 Free Speech is Dead: An interview with author Ellis Cose

Our hosts interview with author and former columnist, editor, and  correspondent Ellis Cose to discuss the myth of "free speech" in  America, how the right is co-opting the term to justify untruthful and  hateful political speech, and how - under the guise of "free speech" -  corporations, the rich, and the powerful have managed to dominate our political discourse and the outcome of elections at the expense of the rest of us. We learn why "free speech," for the common person, is dead.    Ellis Cose's most recent book: https://elliscose.com/bookshelf/the-short-life-and-curious-death-of-free-speech-in-america/ Our email: superpoliticsshow@gmail.com Cover photo by Zachary Keimig on Unsplash 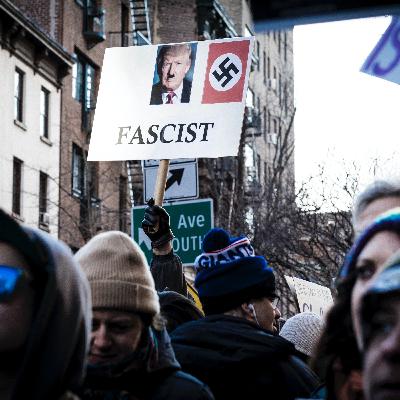 We break down the hallmarks of fascist governments to look at whether the United States is going down that dark road. In a special bonus game-show segment, we ask several innocent citizens: "Who said it? Benito Mussolini, Adolf Hitler, or Donald Trump?"  Featuring: Decatur Brent, Steve Daly, and our new producer, Dr. Peter Pantz.  Episode cover photo by Chris Boese on Unsplash. Intro music: Tangled by Emmit Fenn.  Ben Shapiro WAP Remix by DJ iMarkKeyz.  Outro music: A fascist montage by Decatur Brent Our podcast made the cut for this blog's list of top 15 leftist political podcasts. Check it out. Support our show on Patreon. 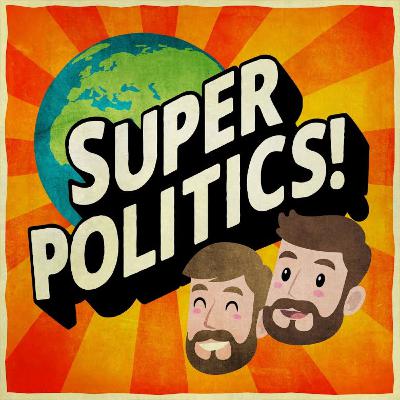 Little did you know, the first 8 episodes were “season 1” (we just decided this). We give you a little sneak peak of what is coming up for season 2 and beg for your money. Patreon.com/superpoliticsshow 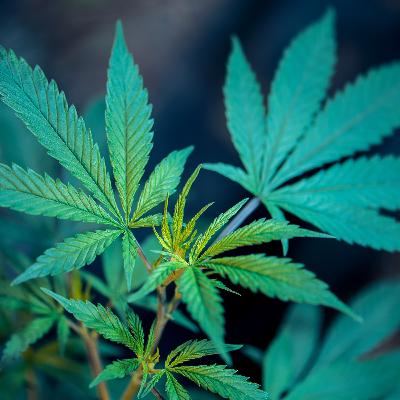 The "war on drugs" is an intentionally racist government program that has disrupted Black, underrepresented communities throughout the nation for over 30 years. It is a huge reason for the over-policing of predominantly Black neighborhoods, the state of mass incarceration, and why experts discuss our criminal legal system as being structurally, systematically racist. Steve and Decatur discuss the history of this domestic "war" on our own communities, drug policy, and why our government tells us drugs are bad when all the "cool" kids in school told you otherwise. Decatur put together an apple music playlist with songs about the war on drugs here: https://music.apple.com/us/playlist/war-on-drugs/pl.u-76oNPMNu414dWW You can check out Michelle Alexander's full speech about the war on drugs, excerpted in the episode, here: https://www.youtube.com/watch?v=P75cbEdNo2U Michelle Alexander's full book, The New Jim Crow, can be purchased here: https://newjimcrow.com/ Check out the official music video for Killer Mike's song, Reagan, here: https://www.youtube.com/watch?v=6lIqNjC1RKU Cover photo by Roberto Valdivia on Unsplash 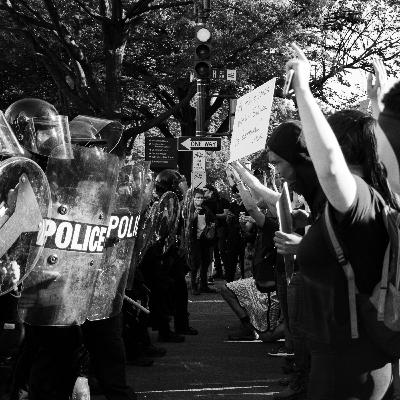 Steve and Decatur talk about the recent protests, the racist history of policing in the United States, killer cops, police brutality, lack of police accountability, and proposals to rebuild American institutions to achieve true justice and equality for Black Americans. Photo by Koshu Kunii on Unsplash. 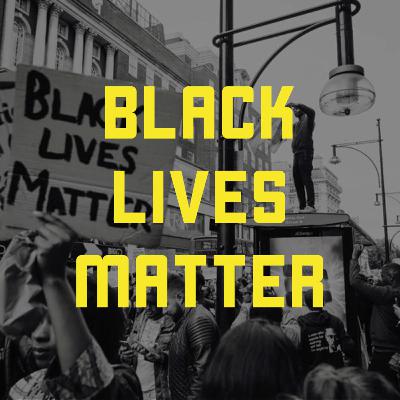 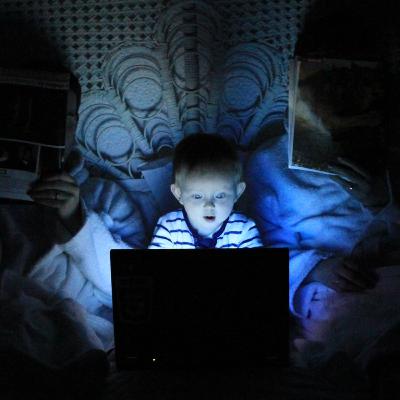 Our hosts discuss the so-called "intellectual" dark web, other internet personalities, and how YouTube's algorithm has contributed to the rise of far-right nationalism. Please see the links below for further recommended reading/listening from some enlightened thinkers online, for free. Trust us, the links are legit ;) just click them, you'll see. Episode cover photo by Ludovic Toinel on Unsplash. Dr. Cornel West - a democratic intellectual. He is Professor of the Practice of Public Philosophy at Harvard University and holds the title of Professor Emeritus at Princeton University. He has also taught at Union Theological Seminary, Yale, Harvard, and the University of Paris. He graduated Magna Cum Laude from Harvard in three years and obtained his M.A. and Ph.D. in Philosophy at Princeton. Recommended introductory listening is his speech at a Bernie Sanders rally in Flint, MI, and his argument on Occupy Wall Street in Oxford, England. ContraPoints - Natalie Wynn is a social commentator, entertainer, and video essayist with over 850 thousand subcribers to her channel ContraPoints. Her videos on internet culture and online hate movements have become an online cultural phenomenon, gaining over 48 million views and earning her position as one of the most influential figures in online progressive activism. Kyle Kulinski - a left-wing radio host, social democratic political commentator, and the  co-founder of the political organization Justice Democrats. He is the host and producer of the YouTube show Secular Talk, an affiliate of The  Young Turks network. Secular Talk has over half a million subscribers  and nearly half a billion views. Ben Burgis - Ben Burgis is a philosophy professor and the author of of Give Them An Argument: Logic for the Left. He does a segment called "The Debunk" every week on The Michael Brooks Show. Here are his writings for the progressive Jacobin magazine.

Lacking Trust in a Secretive Government: UFOs and Conspiracies

What do Ronald Reagan, Harry Reid, and Tom DeLonge of Blink 182 have in common? UFOs. With special guest host The Quiet Giant, our hosts talk about the need for government transparency in a democracy and why people don't trust power. We talk about the recent "Plandemic" video, look at the Navy's recently released UFO videos, former Senator Harry Reid's $22 million UFO-investigation program, Tom DeLonge of Blink 182's UFO-research company, and why the Reagans believed in aliens.

Our hosts discuss the ridiculous viral CNN interview with Las Vegas mayor Carolyn Goodman and continue their discussion of Joe Biden's candidacy, looking into his voting record, bizarre history of lying and plagiarism, and allegations of inappropriate behavior towards women. In the end, what do you do as a resident of the United States when you are faced with two options for president who do not represent you? (Voice acting: Victoria Spelman)

Steve and Decatur talk about Joe Biden's interest in the oil world and his love of the Iraq war.

Coronavirus and the socialist Republicans

Our hosts discuss how the coronavirus caused the Republicans to pass a very socialist, bipartisan bill that literally hands out money to every documented person living in America, how the coronavirus is highlighting our inadequate social safety net in the United States and the weaknesses in a deregulated, capitalism-first society, how Alex Rodriguez of the New York Yankees might have the cure to coronavirus, and why New York City’s government telling us to do things they normally wouldn't bring up. Guest starring  Ruth Bader Ginsburg (no relation)

Has the coronavirus turned the Republicans into socialists? Which alleged sexual predator would make a better president? Is Trump tapping A-Rod for VP? Does the world need more podcasts? Find out this and more on Super Politics! The progressive political comedy podcast of your dreams.
See More
Comments (1)

Episode compares historical fascist governments to what is going on today in the USA to decide whether we are on the road to fascism ourselves, concluding we are.